Tai Chi Chuan is the art of observing and changing yourself.

After years of research and development, across China and North America, this is the best definition I have encountered. It is accurate and complete.

I believe that clarity and simplicity are the ultimate sophistication. If I ever find a simpler viable definition of Tai Chi, I will gladly adopt it. However, I suspect that with any further simplifications, some critical aspect of this art would be lost.

I prefer to study the art of Tai Chi without strictly defining its boundaries. Its truths are self-evident. But in my role as a teacher, I must address reasonable questions that students bring to class.

Questions such as, Is Tai Chi a martial art?

Before we attempt to answer this question, let’s quickly review the history of Tai Chi Chuan. No mythology or metaphysics, just verifiable history—from the year 1850 up to the present day.

Each of these distinct versions of “Tai Chi” is a product of then-contemporary values, attitudes and goals.  Each iteration was real, authentic, and genuine in its own place and time.

Your own personal goals will determine which version is best for you.

Choosing your own Tai Chi Adventure

Yang style Tai Chi, as demonstrated by masters Yang Chengfu and Fu Zhongwen, is a difficult standard. We learn the art by attempting to reach and uphold this high standard. We transform ourselves in order to meet the standard.

Our bodies, experiences and expressions are unique. We can allow for variations in our performance. But we mustn’t fool ourselves while doing so. To argue that Tai Chi Chuan is precisely that limited collection of skills and ideals that we currently prefer or possess, is both to deny history, and to handicap our own future development.

Too many enthusiasts have chosen this path. Cherry-picking those historical data points which support their biased views, while ignoring the rest. They have purchased clarity and self-esteem at the expense of wisdom and skill.

Tai Chi in a Nutshell

Why are there so many postures and movements in this form? Tai Chi ought to be simple. Let’s just try to get into the flow. Because at its core, Tai Chi is really just a method for relaxation!

I understand the appeal of this story. If stress is bad and relaxation is the opposite of stress; and if stress is universal and modern, and Tai Chi is ancient and relaxing; then the ancient art of Tai Chi is the perfect holistic solution to our debased modernity. It all makes perfect logical sense! Ha ha.

Excessive muscular relaxation leads to hyperflexion and hyperextension. The long-term outcomes of this habit are chronic pain and injury. This “accomplishment” will likely ruin your back and your knees.

“Relaxation” is not the essential goal of Yang style Tai Chi.

Another overly simplistic approach is to focus on spirit and energy, under the operative belief that energy is inherently superior to physical matter. Have you ever heard a story like this?

Taiji Quan is a meditation designed to cultivate the development of our subtle internal energies, which are known as Qi, Ki or Prana. All the same. See, the entire universe is made up of energy. Most Westerners don’t understand this, but my chakras are fully opened so…

We must not overlook the obvious here. Tai Chi is a body movement practice. Yang style Taijiquan demands that the entire body move continuously.

Whereas the practical methods of neigong training demand that your body does not move.

Fine… but is it a martial art? Yes or no? 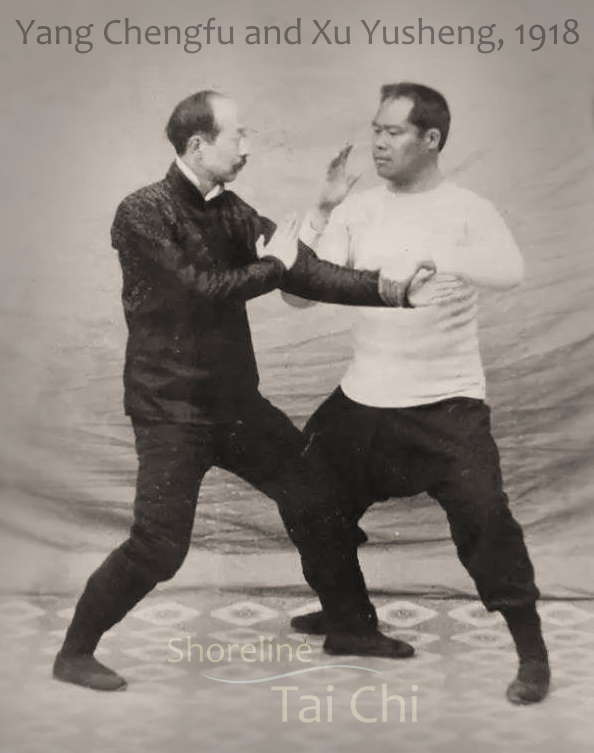 Yang Chengfu and Fu Zhongwen were respected members of the Chinese wushu community. If not for their courage and ability to defeat the boxers, wrestlers and fighters of contemporary Beijing and Shanghai, this art of Taijiquan might have faded into obscurity, or disappeared entirely from the earth.

If our question is whether Tai Chi can be employed against martial artists, for combat and self-defense, then the answer is clearly yes…

Why should we insist that Tai Chi a martial art, exactly? You tell me. Please.

I’ve spent three decades now in search of a properly formed and convincing argument; one that is supported by and contextualized within history, science, politics and philosophy. I’ve never found it.

What I have found are dozens of flimsy anecdotes, fantasies and fallacies. About how Quan means Fist in Mandarin, and Mars is the Roman god of war, and Grandmaster Yang Luchan was invincible, and Grandmaster Chen defeated all challengers with his mighty fajin power…

All of them just begging the question really.

I realize that a dedicated minority of students are intrigued by this idea. By the potential of Taijiquan as an art for self-defense and personal protection, or as an element of combat sport. These notions are correct. Tai Chi can be used for these purposes.

At the same time, I know that a majority of potential students are frightened, made anxious or even disgusted by the negative implications of those same ideas. By some imagined equivalency between Tai Chi, criminal violence, and low-class pugilism… unsuitable for, and unworthy of decent peace-loving citizens like us.

This is a false equivalency. Martial art is not equal to mindless destruction. It has its necessity, virtue and even beauty. Nevertheless, I have sympathy for those who believe that it is purely a vice. I don’t want anyone to shy away from learning Tai Chi due to such misconceptions.

Now, having examined all the relevant facts and their consequences, we can finally return to the original question.

Is Tai Chi a martial art?

Unfortunately…it depends. Because, much like those varying definitions of Tai Chi which we summarized above, the meaning of “martial arts” has itself shifted, to serve the financial and political interests of our times.

As of this specific moment in history, Wikipedia claims that:

…martial arts are codified systems and traditions of combat…except when they are entertainment, or some kind of intangible cultural heritage.

Check the article edit history. You’ll see that final clause was tacked on in February 2016; undoubtedly in an attempt to increase the global prestige of Tai Chi, and thereby embiggen its stakeholders. (You must understand that, in addition to the myriad definitions I shared at the start of this essay, Tai Chi is also a form of international politics!)

You may choose to accept the current Wikipedia definition of Martial Arts, arbitrary as it is. If so, then I have good news. Tai Chi is officially a martial art.

Unfortunately, so are catfish noodling, yoga and the foxtrot.

It’s complicated. I hope you begin to understand now, why I could not address this “simple question” with an equally simple answer.

I teach Tai Chi Chuan. The art of observing and changing yourself. If you dedicate yourself to this art—if you transform yourself through this art—you can expect a positive change in your relationships and circumstances. Of course you will! And a hypothetical attacker may bounce away, fall down, or injure themselves when encountering your skill. Who knows?

Does all that make Tai Chi a martial art? Feel free to decide for yourself.

…over my 40-odd years of studying, I have found few -- teachers or students -- with [Chris'] grasp of Tai Chi and his ability to convey it to others.

Sign up for monthly Tai Chi practice tips, advice and updates from our school...